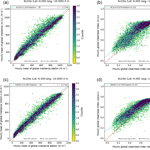 Downwelling surface solar irradiance in the tropical Atlantic Ocean: a comparison of re-analyses and satellite-derived data sets to PIRATA measurements

Abstract. This paper assesses the merits and drawbacks of several data sets of solar downwelling radiation received at the horizontal surface of the tropical Atlantic Ocean where the magnitude of this radiation and its spatial and temporal variability are not well known. The data sets are compared to quality-controlled measurements of hourly means of irradiance made at five buoys of the PIRATA network for the period 2012–2013. The data sets comprise the re-analyses MERRA-2 and ERA5, and three satellite-derived data sets: HelioClim-3v5, SARAH-2 and CAMS Radiation Service v2. It was found that the re-analyses MERRA-2 and ERA5 often report cloud-free conditions while the actual conditions are cloudy, yielding an overestimation of the irradiance in such cases; and reciprocally, they report actual cloud-free conditions as cloudy, yielding an underestimation. The re-analyses exhibit more bias in irradiance in cases of medium and high-level clouds than for low-level clouds. They correlate well with the hourly means of irradiance (as a whole, correlation coefficients greater than 0.85 for MERRA-2 and 0.89 for ERA5); they correlate very poorly with daily means of irradiance (coefficients of less than 0.48 and 0.59 for MERRA-2 and ERA5, respectively) and with the hourly and daily clearness indices (coefficients of less than 0.53 and 0.46 for MERRA-2 and less than 0.63 and 0.59 for ERA5). The irradiance pattern at both hourly and daily timescales is spatially distorted by re-analyses, especially for MERRA-2. The three satellite-derived data sets exhibit similar performances between them. The correlation coefficients are greater than 0.95 and 0.78 for irradiance and clearness index, respectively, in most cases for hourly values and 0.90 and 0.88, respectively, for daily values. The relative standard deviation of errors is of the order of 15 % for hourly values and 8 % for daily values. It is concluded that these data sets reproduce well the dynamics of the irradiance and clearness index at both hourly and daily timescales. They exhibit overestimation, with the lowest biases reached by the CAMS Radiation Service v2 and ranging between 11 and 37 W m−2 depending on the buoy. It is suggested that HelioClim-3v5 and CAMS Radiation Service v2 are suited for reproducing the spatial gradients of the irradiance and reflecting the spatial variability in the irradiance.